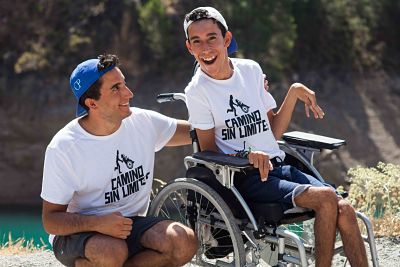 We like to be supportive and share. Our Office has been demonstrating its Corporate Social Responsibility for years in solidarity actions to contribute to those who have it a little harder.

Road Without Limits, the only limits that exist are those that we put ourselves. Go!

LegaleGo Abogados in Granada, with offices in Jaén and Madrid, participates in the world premiere of the documentary Camino Sin Límites on October 22 that will be screened at the Kinépolis Ganada movie theater located in the Nevada Shopping Center.

As a result of cerebral palsy a few hours after birth, Juan Luis has a disability of 96%. On September 13, along with his brother Juan Luis, they traveled almost 800 kilometers that make up the Camino de Santiago Francés.

With this project, they wanted to demonstrate the reality faced by all people with disabilities and reduced mobility day after day. Therefore, they made the road without taking shortcuts or alternatives by road, as some more pilgrims made the traditional route.

They recorded each of the stages of the Camino and published them on their YouTube channel “Camino Sin Límites”. Everyone can check the suffering and joy of each day for each stage overcome. Halfway through, they met Joan Plana, a filmmaker who, after learning about the project, decided to film a documentary to tell the world about our history and that will be screened in Granada on October 22. This event will coincide with the day of his arrival at the Plaza do Obradoiro de Santiago de Compostela who started their adventure on September 13, 2016 and finished it on October 22 of the same year.